Grupo Varo has once again trusted in Global Power Generation by contracting services from its conventional engineering division, GNFidg. The contract is initially worth US$ 68,950 and involves preparing a new bid for CENACE.

In 2015, Grupo Varo awarded a contract to GNF Ingeniería y Desarrollo de Generación (GNFidg) for the services of technical consultancy on site engineering (selection process for suppliers of equipment and EPC contractors, engineering review and potential construction oversight services in the event of bid success) based on two 60 MW engine plants – Leon I and Salto I – that were presented in the second CENACE tender in 2016. On that occasion, Grupo Varo was not awarded the contract and is now thinking to take part with a new project in the third CENACE tender, which will be announced in 2017.

On this occasion, Proyevaz Energía, a subsidiary of Grupo Varo, will submit a bid for the Mexican Electricity Market Tender based on one 600 MW engine plant located in the municipality of El Salto, in Jalisco, known as “La Jacaranda”.

The role of GNFidg is that of site engineer and advisor to Proyevaz throughout the bid process, from selection of the EPC contractor to consultancy regarding all technical aspects of the project. In the event that Grupo Varo is awarded the power sale rights by CENACE, GNFidg will be contracted by Proyevaz as supervisor of the engineering, construction and launch of operations under the project for the approximate amount of 3.4 million dollars.

Grupo Varo, which is based in Guadalajara, has significant operations in the construction and communications sector, and has recently launched operations in the electricity generation sector with an ambitious medium-term growth plan. 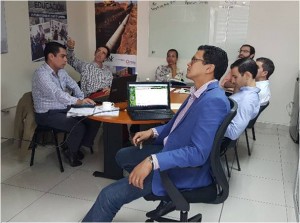 Global Power Generation is expanding its regional presence in Central America after signing a new generation engineering contract in Honduras. In February, the company Generadora los Cerros (GENEC) in Honduras signed two engineering contracts with GNFidg for the development of projects in its portfolio, the 5.5 MW Jícaro I hydro-power plant and 15 MW Jícaro II hydro-power plant. The contract includes the Pre-feasibility studies and Basic Design for both power plants and is worth US$ 113,000. Both plants are located in the municipality of Lempira to harness water flows in the Rivers Saína and Mocal, and will be developed within a period of six months.

During the negotiations, GENEC expressed its interest in GNFidg also taking part in the future development of these projects once the finance for both hydro-electric projects has been ensured, taking responsibility for overseeing construction and commissioning. This once again clearly reflects the high level of trust that clients place in Global Power Generation.